by Desmond Sham   Political regimes often signify and demonstrate their power through urban landscapes. It is not uncommon for colonial powers to construct new architectures and monuments, and deliberately alter existing pre-colonial urban landscapes to express their authorities. How to deal with the colonial built environments have constantly been a question for postcolonial societies.

In her lecture “Heal the traumatic colonial memories? Reconstructing Seoul’s post-colonial landscape through the treatment of Japanese colonial architecture”, Dr. Hyun Kyung Lee illustrated how the Japanese colonial architectural legacy of Seoul had been treated in post-colonial Korea by the military dictatorships and the later civil governments. Building upon the literature of “difficult heritage” by Sharon MacDonald, and William Logan and Keir Reeves, Dr. Lee examined the different management and changing meaning of the Japanese Government-General Building, Seodaemun Prison, the Grand Shrine at Nam Mountain, and Dongdaemun Stadium.   In the lecture, Dr. Lee carefully examined how the meaning of various places of Seoul, as well as the political power symbolized in the urban landscape, transformed under Joseon Dynasty (1392 – 1897), the short-lived Daehan Empire (1897 – 1910), the colonial period (1910 – 1945), and the postcolonial era. For instance, places symbolizing the pre-colonial dynastic rule, such as palaces and shrine, were either demolished or transformed into other uses under Japanese colonialism. The Japanese colonial government deliberately chose to build the Government-General Building at the site of the former Gyeongbokgung Palace. They also built other structures such as the Grand Shrine to symbolize the colonial rule. By doing so, the central axis of the city, which symbolized the political power, was also shifted. Similarly, the western part of the city was also transformed. There housed Mohwagwan and Yeongeunmun, which symbolized the Sino-Korean tribunal relationship during the Joseon Dynasty. During the short-lived Daehan Empire, they were replaced by the Independent Gate, representing Korea as an independent nation. Under the Japanese colonial rule, the Seodaemun Prison where independent activists were jailed was built nearby.   The end of the Japanese colonialism did not mark the demolition of these structures but the Grand Shrine, which was demolished with rituals by the Japanese. Dr. Lee examined the later treatments of these sites. The Japanese Government-General Building remained as the seat of the government until early 1980s when the building was converted into the National Museum. The Seodaemun Prison continued to be used as a prison, where many dissidents were jailed. Both of them were viewed as sites embedding the pain and trauma of the nation. Yet their fates were different. The Government-General Building was demolished under the democratic-elected Kim Young Sam presidency. Meanwhile, the Gyeongbokgung Palace and its main gates representing the Korean tradition were restored. The restoration of the Palace is still taking place now. Dr. Lee told the story that President Kim even used the fengshui rhetoric to solicit support of the demolition; on the other hand, museum workers who opposed the demolition of the Government-General Building still remain reluctant to discuss the issue. In contrast to the demolition of the Government-General Building, the Seodaemun Prison was preserved and converted into a museum. Yet the museum exhibition mainly focuses on the imprisonment of independent activists of the colonial era rather than that of the dissidents under military dictatorship.   In contrast to the Government-General Building and Seodaemun Prison, the politics of the Dongdaemun Stadium was often overlooked. Dr. Lee suggested that the Stadium was part of the projects of Japanese assimilation policy through physical education and entertainment; on the other hand, the colonized Koreans also tried to use sports as resistance. Similar to the colonial authorities, the post-war military dictatorship also used sport and entertainment to distract popular interest from political realities. Thus, the place was often remembered as entertaining and happiness. As the Japanese colonial history was often associated with pain and suffer, the stadium was often disassociated with the colonial history.   Throughout the lecture, Dr. Lee elaborated how the Japanese colonial architecture intertwined with the pre-colonial, colonial, and postcolonial memories, and how they took part in the politics and nation-building process. Yet at the same time, the postwar history of Cold War and military dictatorship embedding in the same buildings were often less touched upon. Dr. Lee left an important question for the audience: Did the Korean government’s treatment of the colonial architecture heal the traumatic and painful colonial experience? Or, was the colonial memory not yet overcome?   The Taiwanese and Korean societies may have different attitudes towards the Japanese colonial histories and experiences. Yet, the Taiwanese societies have also encountered other difficult memories not yet overcome. Putting into the wider Asian context, “difficult memories” in different societies include those of the colonial, wartime, conflicts, and authoritarian rules. Such memories are also embedded in architectures and urban landscapes. How they are treated and how such histories are narrated are still major questions for many. I am confident that Dr. Lee’s talk and her upcoming book, “Difficult Heritage” in Nation Building: South Korea and Post-Conflict Japanese Colonial Occupation Architecture, would provide an insightful referencing angle. 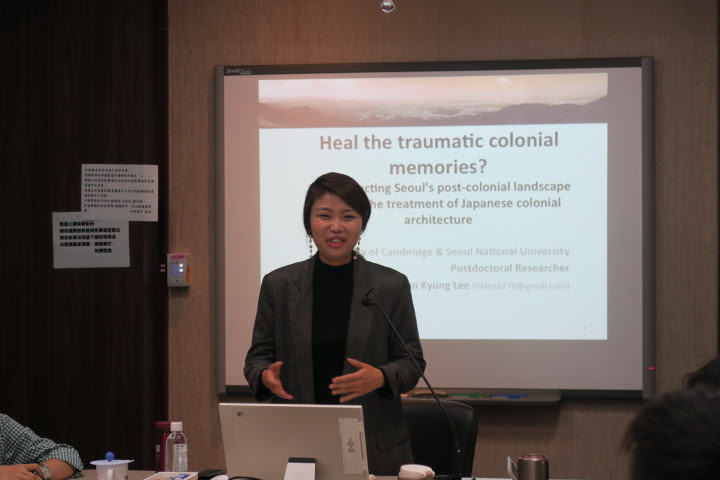 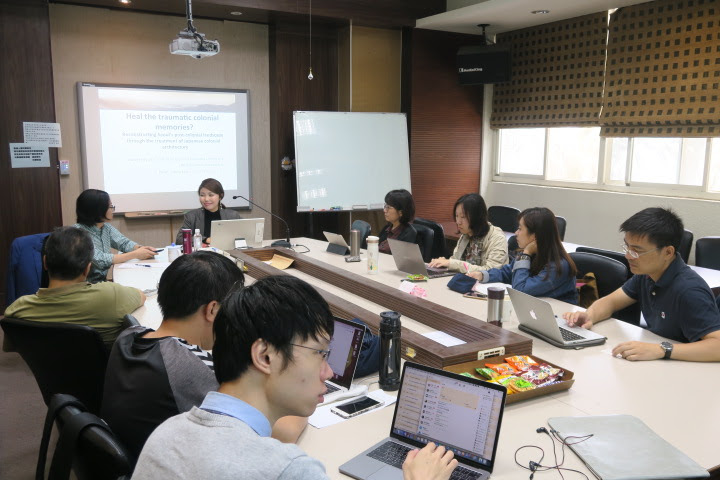 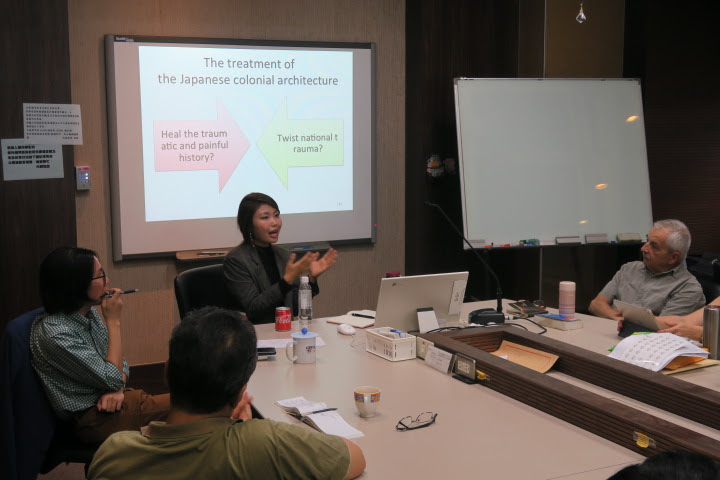