【Chinese and English versions are available simultaneously】Where are the people? People’s theater in Inter-Asian Societies 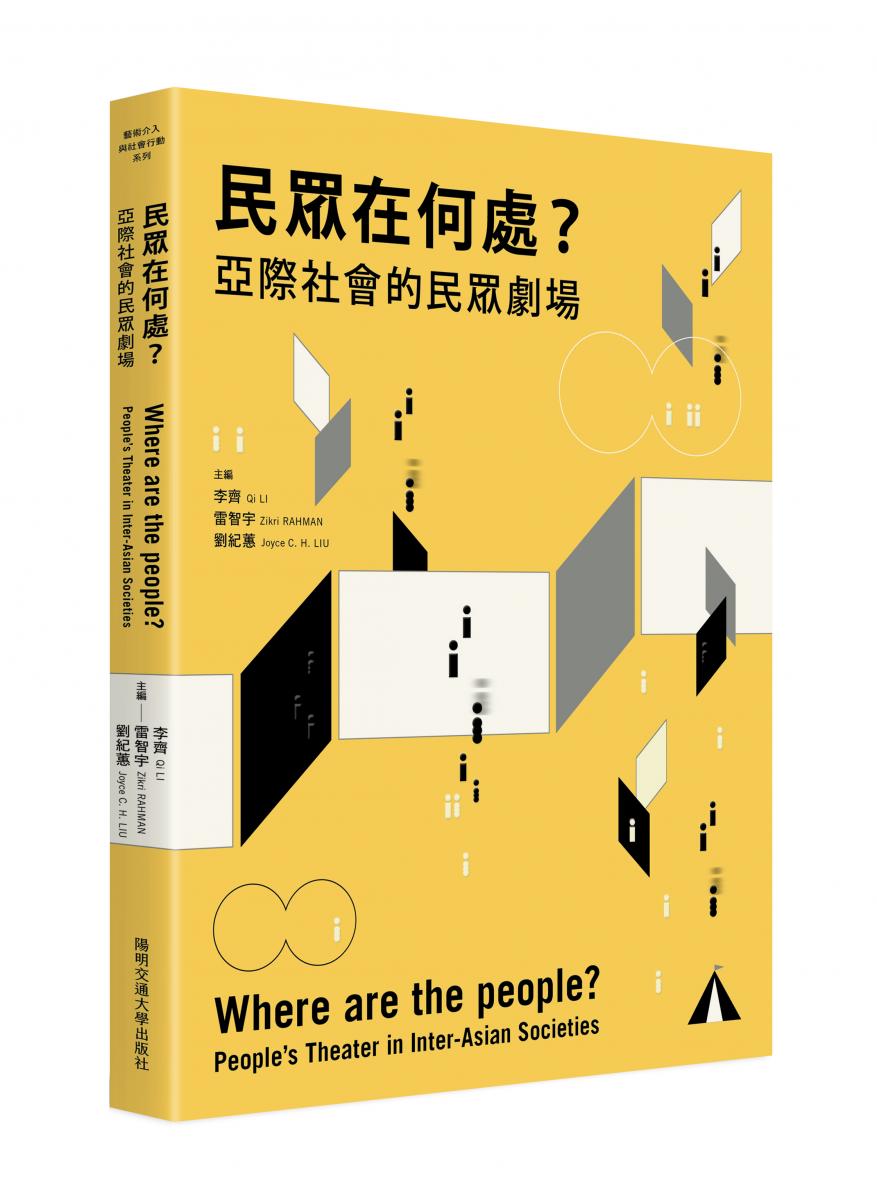 Where Are the People?

At That Time, the Audience Really Stood Up.

In this evening, theater practitioners initiated the conversation with physical action. They engage with contemporary issues through their unique performance styles. From a discursive context, they enter the scene of resistance and undertake the labor of performance. Their performance is not just the preface to a series of dialogues, but also a witness to thirty years of People’s Theater.

“People’s theater” belongs to the people.

It is the theater created by the people and speaks for the people as it has appeared in history in diverse forms.

People theater in Inter-Asian Societies began to grow in a cross-region, which included Jakarta, Manila, Bangkok, Kuala Lumpur, Hong Kong, Tokyo, Busan, Maputo, Beijing, Shanghai, Hualien, Taichung, and Taipei. Through the writings and images written down by theatrical artists from these spaces, we can figure out the body aesthetics that carry historical conflicts and the experience to find the form and channel of expression, and continue for work of thinking and creation.

“People Theater” is nothing but a rehearsal for a revolution.

This book has reviewed and reflected on the half-century development of people’s theater in inter-Asian societies, demonstrates how the theatrical practitioners and artists in different communities strived to open various spaces, dealt with the censorship from the authoritarian regime to the neoliberal societies, and experimented with diverse aesthetics and local objects to address political issues.

“It is a collection with the premise that can motivate our critical thinking with bodily energy. It reflects how we realize the statement—‘Viewing as participating; audience as actors.’It is also a book where some keywords constantly appear, like resistance, politics, the oppressed, and conversation. With its humming buzz and murmur against the present situation, it is a collection of words refusing to remain silent.”— Lin Hsin I（Associate Professor at the Institute of Applied Art, National Yang Ming Chiao Tung University）

1.Beyond the geographical limitations of Taiwan and East Asia, combined the context of Inter-Asian societies and Third-World society, appreciate the theater work methods that are intertwined with folk culture and community traditions, and promote the practice of public theater.

2. This book focuses on depicting network relationships in specific historical periods, and explores how the cooperation and interaction of troupes in these heterogeneous regions occurred. And how do these interactions affect the characteristics and forms of popular theater organizations in the transition of different policies?

3. What this book looks back on is not only the continuation and development of troupes but also the sudden change or gap between new people theaters and old people theaters.

13 PREFACE Make Inquiries among the People: A Kind of On-site Performative Archive

19 PREFACE Where Are the People? How Could the People’s Bodies Voice Themselves in the Form of Theatrical Aesthetics?

Heralds of Resistance: Inter-Asian People’s Theater In the Early Days

71 Moving History: Representation of Teater Kubur Performances from the New Order Regime to Post-Reformation in Indonesia

97 A Transformative Theater of Dialogue: The Makhampom Theatre Group’s Negotiation of Thailand’s State of Repression

141 Review: Beyond These Words

Emancipation of Body: The Origin and Transformation of

177 The Presence of the Oppressed

185 Can Theater Transform the World? Reflections on the People’s Theater in Asia

207 Return to the Theater of the Oppressed: Trans-Asia Sisters Theater’s Empowerment, Organizing and Mobilization

213 Between Acting and Realities: Towards a Self-reflexive Practice of Shigang Mama Theater

221 Review: Little Theater and the People

Outspreads: Practices of Peoples Theater In Our Time

231 The Background and Activities of Theater Playground SHIIM

249 Grass Stage at the North Gate of Foxconn: from World Factory to the Five-year

261 At the Boundaries of Body, Society, and Theater

273 Yuquan Training: A Perspective in the Practice of Oz Theatre Company

279 A Self-interview: Of Teatro em Casa and Glimpses of Mozambique’s Theater

287 Review: People’s Theater, A Total War Towards the Theater Institutions

295 Biographies of Editors, Authors and Translators

Qi Li is a Ph.D. student in Institute of Social Research and Cultural Studies in National Yang Ming Chiao Tung University. She came to Taiwan out of curiosity, then got a journey full of adventures. Her ongoing projects focus on life stories of the small theater practitioners, the technologies of mobility and governance in contemporary conditions, and the political-economic transitions on both sides of the Taiwan Strait over the last half-century. She writes articles and reviews for independent media and research institutions based in different countries. She was the coordinator of “Where the People Are…Workshop on People’s Theater in Inter-Asian Societies” in December 2018.

Zikri Rahman has consistently embarked on collaborations with educational and cultural activist groups in various socio-political projects through Buku Jalanan, a rhizomatic network of street library movement he co-founded in the year 2011. Operating as a loose cultural and knowledge workers movements, it focuses on decentralizing the modes of knowledge production. Other than that, he is also affiliated with Pusat Sejarah Rakyat, independent archival research and documentation focusing on Malaysia and Singapore’s people’s history. With LiteraCity, he initiated a literary and cultural mapping project in the city of Kuala Lumpur. Currently pursuing his postgraduate studies in Social Research and Cultural Studies in Taiwan, Zikri is also a writer, independent researcher, translator, and podcaster for various ephemeral platforms.

Joyce C.H. Liu received her Ph.D. degree in Comparative Literature in 1984 from the University of Illinois at Urbana-Champaign, USA. Currently, Dr. Liu is the Director of the International Center for Cultural Studies, and a full-time professor at the International Program in Inter-Asia Cultural Studies, and the Director at the National Yang Ming Chiao Tung University. Her research focuses on geopolitics, biopolitics, border politics, internal coloniality, unequal citizens, epistemic decolonization, and artistic interventions. She has published six books, 100 peer-reviewed journal articles, and chapters and coedited nine books. She is leading two ongoing joint research projects: “Conflict, Justice, Decolonization: Critical Inter-Asia Cultural Studies,” awarded by the Ministry of Education, Taiwan (2018-2022), and “Migration, Logistics, and Unequal Citizens in the Global Context” (2019-2022), awarded by CHCI-Mellon Foundation.

▍CURATOR OF THE OPENING NIGHT

Theater director, producer and festival director, film researcher and curator.The director of Body Phase Studio since 2007 and has been as Director of Guling Street Avant-garde Theatre (GLT) since 2008.

A documentary photographer. Over the past three decades, he has consistently documented the diverse phenomena of the post-Martial Law Taiwan and on/off the stage of modern theaters.

Glecy Cruz ATIENZA／A Professor at the College of Arts and Letters, University of the Philippines, Diliman, Quezon City.

BAEK Dae-hyun／A producer and an actor for the works of SHIIM.

Richard BARBER／A theater worker and independent scholar working as the co-director of Free Theatre in Melbourne, Australia and advisor to the Makhampom Theatre Group in Thailand.

ZHAO Chuana／A writer, theater maker and curator who creates alternative and socially engaged theater in China. Also, he is the founding member and mastermind of the theater collective Grass Stage since 2005.